A heavy Irish accent bellowed from behind the glass as I surrendered my passport, “What brings you to Ireland, Miss?” The easiest answer after standing in the customs line following a red eye flight with a 5 hour time difference could have been that I was simply on vacation. Instead I looked up from shuffling through my carry on bag with the corner of my mouth turned upward and replied, I’m here to record some music.”

Why Ireland? Ireland’s music studios have hosted many internationally known artists, from U2 and Michael Jackson, to Enya and the Cranberries, as well as Snow Patrol and The Script. Many fantastic records have been born in this beautiful country and Dublin still booms with traditional Celtic/Irish music as well. The attraction of our own Celtic tendencies to Ireland was strong enough to bring us to Dublin in order to solidify a very unique sound for our first record, and we were set on fiddle and flute. We arrived in Dublin on the night of March 28th, ready to be completely immersed in music after spending a glorious 4 days in Barry’s home town, County Donegal, where nature’s own music rings true over lush green pastures and rolling hills checkered with wooden fences and grazing sheep. Arrangements had already been made in advance to enter the studio of Alan Doherty, widely known flautist in Ireland, credited for his work in Lord of the Rings. We decided to introduce ourselves by going to Oliver St, John Gogarty’s bar on Anglesea Street to watch Alan play. Over a hearty pint of Guinness, we watched with excitement, flooded with anticipation about what was in store for the next day in his studio.

When the time arrived, the three of us (Ira, Barry, Becca) rang the bell of a large blue door. We waited to enter our work space for the day, the place we traveled over seas to work in, to meet the people we planned 5 months in advance to work with. At this point, all the questions, anticipation, and preparation were behind us and the moment was there and then.

Alan, with a smile spread from ear to ear greeted us at the door and led us to our working area. He was a familiar face that morning, since we ventured out the night before to watch him play. We settled into our working environment, dissecting each track piece by piece and laying a foundation for organization.

Our fiddler, Aoife Kelly, a gorgeous and eclectic character who is known for her unique style of playing in clubs and collaborating with Dropkick Murphy’s, arrived by bicycle with her fiddle on her back, presenting with a bubbly personality. We soon realized that these two extraordinary musicians, even if only together for these few hours, would hold a special place in our hearts, and on our record. A pot of tea and a wee bit of chit-chat and we huddled in the control room, jaws hanging open in complete awe of both Alan and Aoife’s ability to improvise and play exactly what we wanted without even telling or asking. The two of them even worked together, implementing their own instrumental harmonies. In a matter of time, we had gathered multiple tracks of fiddle and flute within 4 of Driving Route 9’s original songs. We hadn’t known the two for more than 24 hours and we could already feel a connection that was just as genuine as it was professional.

It rained for the entirety of that day, as if some sort of energy was released, as if all the tension in the atmosphere had been wrung out after building up from holding it’s breath. We left the studio feeling whole as if the tension within us was loosened, as if the path forward was a little clearer, as if the harmonies between us were truer, if that’s even possible. In the vortex of time that we live, spiraling away from us and filled with obligations, a pure joy wells up during the realization that, in the midst of all of those things, the people you meet at opportune moments can completely change your perspective and maybe even change the path you travel. We know taking the fork in the road that led to Ireland was a daring one, an ambitious pursuit, but we have forged a way overgrown with numerous possibilities and amazing artists who genuinely enjoyed our original music. Our goal is the summer of 2018. Stay tuned for “Matter of Time,” because it’s going to be unlike anything that ever came out of southeast Connecticut. 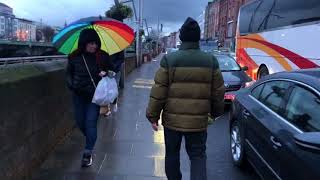